A pointing breed is a type of gun dog. They were bred to hunt and for endurance. While they make wonderful companions for families, they can be prey driven with cats and other animals.

They are a high energy breed and benefit with regular exercise. Without proper interaction and training, they can become bored easily and develop destructive behavior to keep themselves entertained. They are an incredibly smart and social breed. They love to be with their humans. They are loyal, pleasing, obedient, and learn very quickly.

Most range anywhere from 40 to 85 lbs. They generally do well with other dogs and children. They are wonderful dog park candidates as they are a social breed and love to gallup.

All of the dogs in our program will have very different personalities and according to age ranges, the energy levels will vary. If you are interested in a pointer, please be sure to discuss all behavior and needs with the foster parent. We always encourage obedience training classes as this is a good way to bond with your new companion and address any training issues that may be needed. 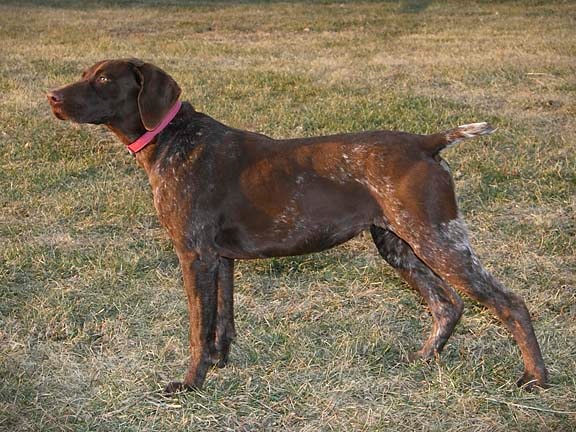 The breed is streamlined yet powerful with strong legs that make it able to move rapidly and turn quickly. It has moderately long floppy ears set high on the head. Its muzzle is long, broad, and strong, allowing it to retrieve even heavy game. The dog's profile should be straight or strongly Roman nosed; any dished appearance to the profile is incorrect. The eyes are generally brown, with darker eyes being desirable; yellow or "bird of prey" eyes are a fault. The tail is commonly docked, although this is now prohibited in some countries. The docked tail should not be too long or too short but should balance the appearance of the head and body. The GSP tail is carried at a jaunty angle, not curled under. When the GSP is in classic point stance, the tail should be held straight out from the body forming a line with the pointing head and body. Like all German pointers, GSP have webbed feet.

The German Shorthaired Pointer's coat is short and flat with a dense undercoat protected by stiff guard hairs making the coat water resistant and allowing the dog to stay warm in cold weather. The color can be a dark brown, correctly referred to in English as "liver" (incorrectly as "chocolate" or "chestnut"), black (although any area of black is cause for disqualification in American Kennel Club sanctioned shows), or either liver and white or black and white. Commonly the head is a solid or nearly solid color and the body is speckled or "ticked" with liver and white, sometimes with large patches of solid color called "saddles". Roan coats are also common, with or without patching. Solid liver and solid black coats also occur, often with a small blaze of ticking or white on the chest. While the German standard permits a slight sandy coloring ("Gelber Brand") at the extremities, this coloring is rare, and a dog displaying any yellow coloring is disqualified in AKC and CKC shows. The colouring of the GSP provides camouflage in the winter seasons. When standing next to dead trees and in broken snow, the white and dark brown coat makes the dog difficult to see.

Since the German Shorthaired Pointer was developed to be a dog suited to family life as well as a versatile hunter, the correct temperament is that of an intelligent, bold, and characteristically affectionate dog that is cooperative and easily trained. They rank 17th in Stanley Coren's The Intelligence of Dogs, being excellent working dogs. Shyness, fearfulness, over submissiveness, aloofness, lack of biddability, or aggression (especially toward humans) are all traits that can occur, but are less likely to exhibit. The GSP is usually good with children, although care should be taken because the breed can be boisterous especially when young. These dogs love interaction with humans and are suitable pets for active families who will give them an outlet for their considerable energy; in this regard some competitively trained GSPs are walking dynamos; they must be avidly run multiple times a week. Most German shorthaired pointers make excellent watchdogs. The breed generally gets along well with other dogs, though females appear to be much more dominant during interbreed interaction. A strong hunting instinct is correct for the breed, which is not always good for other small pets such as cats or rabbits. With training, however, the family dog should be able to discern what is prey and what is not, and they can live quite amicably with other family pets.

The German Shorthaired Pointer needs plenty of vigorous activity. This need for exercise (preferably off lead) coupled with the breed's natural instinct to hunt, means that training is an absolute necessity. The GSP distinctly independent character and superior intelligence mean that any unused energy will likely result in the dog amusing itself, most probably in an undesirable manner.

Failure by the owner to give this active and intelligent dog sufficient exercise and/or proper training can produce a German shorthaired pointer that appears hyperactive or that has destructive tendencies. Thus the breed is not a suitable pet for an inactive home or for inexperienced dog owners. Although these dogs form very strong attachments with their owners, a bored GSP that receives insufficient exercise may feel compelled to exercise himself. These dogs are athletic and can escape from four foot and sometimes six foot enclosures with little difficulty. Regular hunting, running, carting, bikejoring, skijoring, mushing, dog scootering or other vigorous activity can alleviate this desire to escape. The natural instinct to hunt may result in the dog hunting alone and sometimes bringing home occasional dead trophies, such as cats, rats, pigeons and other urban animals. In addition to exercise, especially formal hunting, the GSP needs to be taught to distinguish legitimate prey and off limits animals. 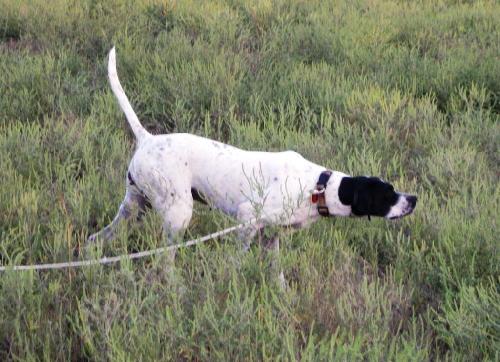 The Pointer traces back from 300 hundred years English history. It is used to catch rabbits and birds. It should be athletic and graceful. The immediate impression should be of a compact, hard-driving hunting dog, alert and "ready to let go." The primary distinguishing features of this breed are the head, feet, and tail. Hound or terrier characteristics are undesirable for show purposes.

Grooming an English Pointer is not time-consuming. The coat is very short and needs only a quick rub with a soft brush to minimize shedding.

The standard colorings of the Pointer are liver and white, lemon and white, orange and white or black and white. Lemon and Orange dogs have flesh-colored noses, while orange and white dogs have dark (black or very dark brown) pigmentation on their noses and around their eyes. They may also be any of the above as solid colors; the body of most Pointers is mainly white, but there may be some body markings.

Pointers are even-tempered, congenial dogs, happiest living indoors as part of the family. Pointers are affectionate and loyal. Their aggression level is very low to nonexistent and they can happily coexist with other dogs and often cats. They are typically not territorial, although their size and bark will intimidate most people who come to their door. Pointers are very good with children, although young children and a clumsy young Pointer are often not the best combination.

While Pointers were bred to be hunting dogs, they are perfectly content given adequate exercise by other means. Since they are a galloping breed, regular exercise is important for them, as it is for all sporting breeds. A good-sized, securely fenced yard is a must to keep a Pointer safe, since they are bred to hunt a good distance from their person. When left for the day, they typically do best indoors. Pointers are habitual "couch potatoes" who enjoy relaxing on the family's chairs or sofas. This is a natural part of their desire to feel part of the pack.

The pointer is employed to find upland game. In performing its task as a hunters' aid, these skills may be expected from Pointers when hunting:

Point – The dog finds and points out the location of birds.

Honor – The dog stops immediately or within a few steps, usually in a pointing stance, upon observing a brace mate on point.

Retrieve – Pointers are not expected to be natural retrievers, but are often trained and expected to find dead or wounded game.